PinyinTones is a Windows text service that allows you to type Pinyin tone marks into any Windows program. It was written by Tao Yue.

If you'd like to contribute towards the development of PinyinTones, donations are accepted via PayPal. Thank you!

If you do not know which file to download, press WindowsKey + Pause to bring up the System Information dialog. Next to "System type", it will tell you if you are running 32-bit or 64-bit Windows.

Type Pinyin with tone marks into any Windows program 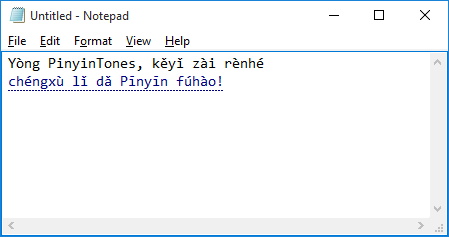 PinyinTones provides a simple way to type Pinyin tone marks into any Windows program. You do not have to copy-paste, or use macros, or memorize alternative keyboards. Best of all, you don't even have to think about which vowel the tone goes over!

PinyinTones runs on all currently supported versions of Windows on x86 and x64 computers.  It has been tested on:

PinyinTones does not run on:

How to Use on Windows 10 and Windows 8.x 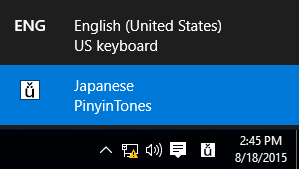 In Windows 10 and 8.x, the input method is associated with the user session. Once you switch to PinyinTones, the setting applies to all programs you have open. This includes desktop applications, as well as Windows Store applications.

How to Use on Windows 7 and Windows Vista

PinyinTones shows up in the Language Band, which appears by default at the bottom-right of your taskbar. It registers itself as a Japanese text service (more on this later). To use PinyinTones:

In Windows 7 and Windows Vista, each program is associated with an input method. Thus, if you wish to type toned Pinyin into multiple programs, you will have to switch to PinyinTones for each program that you open.